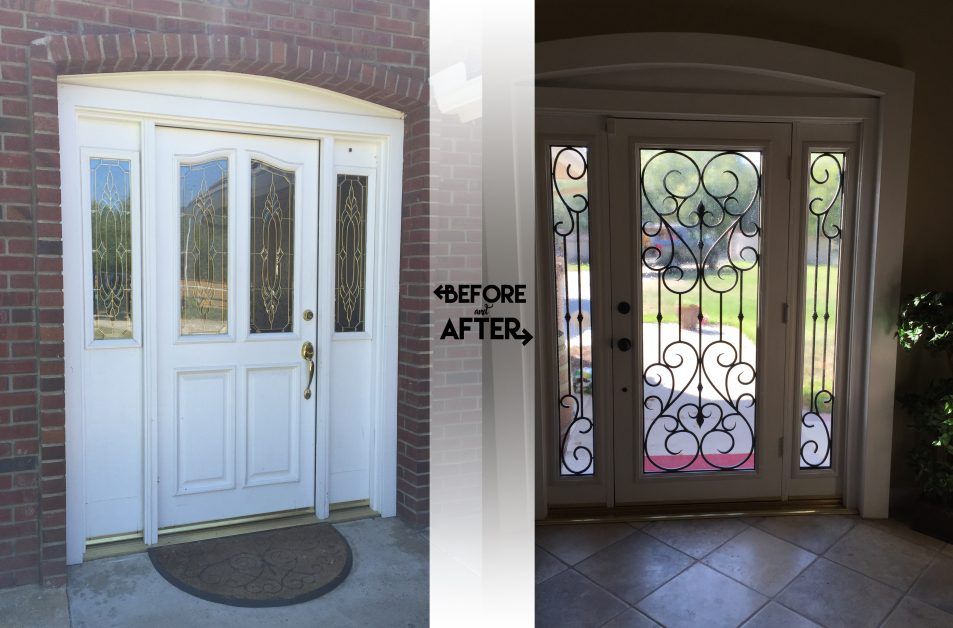 DOES HOLLYWOOD HAVE A PROBLEM WITH DOORS?

Have you ever seen one of those movies that is exceptionally hard on windows and doors. You know the kind I am talking about, anything from the 1980s or 90s when your standard action hero movie was still a viable money making genre. Of course Hollywood seems to hate both windows and doors with a passion. Jets crash through them, people crash through them, cars crash through them, in fact, in pretty much every movie that is action oriented in any way there is a window or a door that is lost. Well, at Entry Brite, we have the utmost respect for windows and doors as we believe that we make some of the finest in the industry. You see, we respect doors and windows so much that we don’t ever want yours to end up forgotten. We do make custom stained glass doors and windows but what if you don’t want to deal with the hassle of fitting a new door, Entry Brite has a solution. We take your old door and mount one of our exceptional designs in the existing door. Most of our clients barely recognize their old entryway door as their own. The process is as painless as choosing a new, updated pattern for your entryway and, boom, a whole new look for your home. Check out our gallery for inspiration or choose a custom door of your own. Needless to say we love windows and doors, doing our best to upgrade your home with our own brand of exceptional artistry is what we are all about. Of course as we said before there is a deep seeded hatred of windows and doors in the motion picture industry. We took it upon ourselves to compile a small list of the movies in which the windows and doors lost.

The ultimate Christmas movie is so extremely hard on windows and doors that it is actually warrants a line in the movie. The hero, John McClane is just hanging out at a party with his wife when the inevitable happens, an international group of terrorists take control of the skyscraper where the party is being held. John is the sole person that can save the partygoers from being murdered by the terrorists. We meet Hans Gruber the charismatic leader of the terrorists and at times he can seem evil but charming. Soon after John receives his first cut, one of many, the windows start being destroyed. He drops a bag filled with explosives down the elevator shaft which blows out a whole floor and that is only the beginning. No window or door is safe in this film and ultimately our villain Hans falls out a window from very high up, with predictable circumstances.

The Shining is a classic in the world of cinema. The story is simple, a man brings his family to the mountains to live in a hotel for the winter and he goes nuts. Okay, so the story is much more than that. Jack is the main focus of this film and we can tell he is a little off in the beginning. As it takes place in a massive hotel, the movie is about doors as much as anything. There are doors and grand windows everywhere throughout the hotel and play a huge part in the movie. Danny is Jack’s son who has special powers that let him see all sorts of weird stuff in the hotel. He rides his big wheel up and down the hallways seeing ghosts and spectres of the hotel’s history. Eventually, the hotel grabs ahold of Jack’s mind and he smashed a door with an axe, sticking his head through and yelling, “Here’s Johnny!” Classic.

The western genre of movies is filled with iconic windows and doors. The most recognizable being the swinging saloon front doors. The hero inevitably strutted out of those weird doors onto the boardwalk to confront a villain, soon after receiving his deputy badge. The barfight would include a fella being slid down the bar and either out the window or into a mirror. Overall, for as expensive as glass was on the frontier in the late 1800s doors and windows were never taken care of very well, at least according to the western. Come to think of it though, nobody ever messed with the swinging doors on the saloon.

So, this might be a long shot but in a story about teen angst set against a backdrop of high school detention, a window must break. The story itself is about all of these different individuals all about at the breaking point in one way or another. This is emphasized by the scream that breaks a solid piece of glass in the library. Not only is it gratuitous destruction of a perfectly good window but, that glass had to have been an inch thick.

One of the defining feature of this movie is the glass garage. The movie is about a kid who doesn’t want to go to school so he and his buddies play sick to go and goof off all day taking a Ferrari from the characters parents. Overall it is a pretty great movie, until the end. At the end, in an attempt to remove the milage the geniuses jack up the car and put it in reverse. Well, the jack stand falls over and the Ferrari is thrust through the gorgeous windows lining the garage. It is truly a sad day for the Ferrari and the window.

The ultimate door movie, Titanic follows the exploits of young Jack (I sense a trend) as he travels on the ill fated Titanic. Rose is a beautiful young women who predictably, falls in love with Jack and they spend the trip sparking a romance. Well, we all know how that ends but when the Titanic hits an iceberg and sinks, Rose and Jack end up floating on a door of all things. Of course the door is not big enough to save them both and Jack freezes to death until Rose pushes him off the door. Harsh.

Entry Brite would like to thank you for spending some time with us and having a little fun. We value each and every one of our clients and look forward to serving your window and door needs. Please give us a call to make your entryway everything you have ever dreamed!